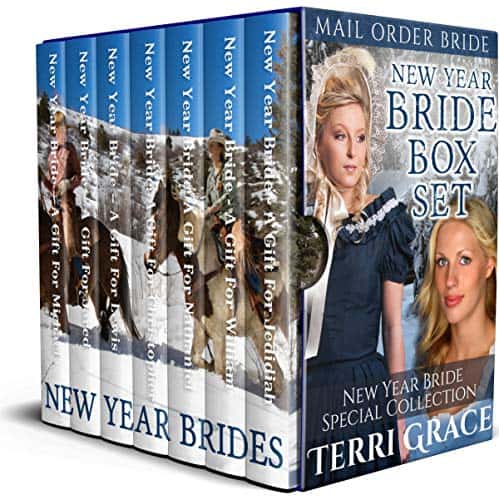 Free to Read on Kindle Unlimited - 7 Book Box Set!New Year Bride - A Gift For JedidiahAbandoned by the man she thinks to be her God-given partner, Salome Newton travels west to track him down. A trail of destroyed families, robberies and broken promises uncover that he is, in fact, an untrustworthy ...

New Year Bride – A Gift For Jedidiah Abandoned by the man she thinks to be her God-given partner, Salome Newton travels west to track him down. A trail of destroyed families, robberies and broken promises uncover that he is, in fact, an untrustworthy wife stealing huckster. Her heartbroken search leads her finally to the small town of Pine Wood, and to the storm-lashed Starry Stud Ranch. Waiting there are two bruised but trusting hearts, believing God for a New Year miracle. Deceivers and disasters, guilty betrayal and innocent faith, a new year prayer and a voyage of penance all lead a happy ending that is actually a new beginning. New Year Bride – A Gift For William Margaret is a mature and God fearing lady, the widow of a city pastor. To escape her grief she seeks companionship with a reformed farrier in the frontier town of Lewiston, Idaho. Their late romance begins well but is interrupted on Christmas day by false accusations thrown at her new husband that leave him in jail. Will she be able to clear his name and celebrate the new year with her loving husband, or will he be slandered and slaughtered for a crime he did not commit? Mature love, a reformed farrier, a frontier romance, Stagecoach robberies and false accusations make for a warmhearted seasonal tale full of winter warmth and family drama. New Year Bride: A Gift For Nathaniel New Year promises to mark a new beginning for Nathaniel Weber. His mail order bride is set to arrive and he cannot wait to put the ring on her finger. What he does not know is that the lady in question plans to arrange an unfortunate accident for her new husband and inherit his property. Fate intervenes and Nathaniel accidentally marries the wrong lady, unaware of the plot against his life. Will Nathaniel discover that his wife is not the woman he has corresponded with? And what will he believe if told the truth about his real bloodthirsty mail order bride? New Year Bride: A Gift For Christopher Christopher Morton is no stranger to tragedy. Scornfully treated and abused by an unthankful wife, it is only his love for his beautiful little daughter who gives him the will to live. When his wife dies he flees with 12-year-old Cindy to New Mexico, a broken man. But Cindy has a plan to revive the heart of her harrowed father. She orchestrates a simple deception that brings a would-be bride to her father’s doorstep just in time for new year. Kimberley Crawford almost turns tail when she discovers the girl’s scheme, but decides to stay when she realizes how desperate little Cindy is to help her pa. The story that unfolds is one of new beginnings for everyone involved. New Beginning Bride – A Gift For Lewis Finding out her dead sister’s horrible secret leads Janice Bowen to traveling to the West to make things right with a man the former had deceived. Lewis Cooper is angry at having been scammed by a woman who pretended to be his prospective Mail Order Bride, but when her sister shows up in Charlton, Idaho, things take a different turn. New Beginning Bride – A Gift For Jared Turned out of the orphanage where she grew up from when she was six, Alice Sanders has to guard her virtue from someone she thought she could trust. A lost telegram leads her to the West and marriage. Jared Powers is shocked when he finds out that the woman he marries isn’t the one he’s been corresponding with for nearly two months. New Beginning Bride – A Gift For Michael Can a man’s heart change for the better? Michael Fount finds out that when the right woman comes into his life, he wants to change and be a better man in order to win her heart. Laura Braxton is forced by circumstances to live in the house of a man everyone considers mean and cruel but the heart wants what the heart wants and she ends up falling in love with him. Love indeed conquers all.
Details
Author: Terri Grace
Genre: Western Historical
Tags: Romance, Terri Grace Boxsets
Publisher: PureRead
Publication Year: 2020
ASIN: B083JHFG79

Preview
Disclosure of Material Connection: Some of the links in the page above are "affiliate links." This means if you click on the link and purchase the item, I will receive an affiliate commission. I am disclosing this in accordance with the Federal Trade Commission's 16 CFR, Part 255: "Guides Concerning the Use of Endorsements and Testimonials in Advertising."