Brides for All Seasons Volume 4 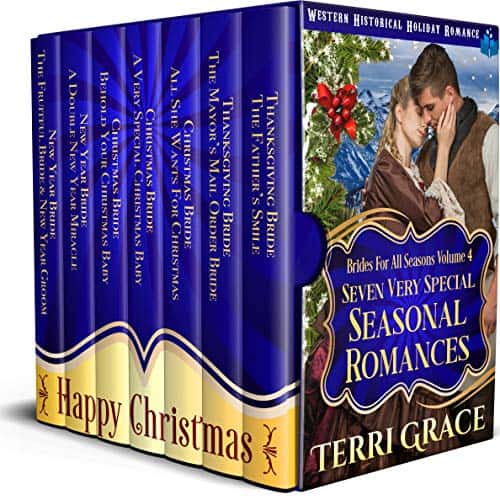 Free To Read On Kindle Unlimited - festive collection of historical holiday romance guaranteed to warm your heart and fill your season with romantic cheer. Buy it today and enjoy the timeless gift of love!Thanksgiving Bride - The Father's SmileEmily and Emma Dyke are lovely little girls who are alwa...

Free To Read On Kindle Unlimited – festive collection of historical holiday romance guaranteed to warm your heart and fill your season with romantic cheer. Buy it today and enjoy the timeless gift of love!

Thanksgiving Bride – The Father’s Smile
Emily and Emma Dyke are lovely little girls who are always grateful even though life hasn’t been easy for them. But this Thanksgiving, they have just one prayer and desire and that is to see their father smile again.

Listening to the sermon of a visiting preacher at church in Camden, New Jersey makes Marjory Brett decide to give these two little girls what they need. So she decides to make the journey to Stoneville, Nebraska to fulfill their wishes, even though she has no idea how she’s going to make their father smile again. She prays that she will be able to help bring an answer to the little girls’ prayer.

Thanksgiving Bride – The Mayor’s Mail Order Bride
A cholera outbreak sends Dr. Belinda Warren to the small town of Middletown in Northern Kansas where she is mistaken by Mayor Evan Doyle to be his Mail Order Bride. She soon clears the air but working alongside him to make the town healthy and safe makes her realize that he’s just the kind of man that she’s been praying for.

Christmas Bride – All She Wants for Christmas
After being rejected by her fiancé when she traveled to Blackthorn as a Mail Order Bride four years previously, Matilda Homer has been hiding behind hats and glasses and everyone calls her Spinster Matilda, thinking she’s a middle-aged woman. When her neighbor’s daughter asks her to help her place an advertisement for a new mother by Christmas Day, it’s quite a challenge to Tilda because she soon accepts that she has developed feelings for the girl’s father.

Christmas Bride – A Very Special Christmas Baby
On Christmas Eve evening, Department Store owner Henry Landon saves a woman who is in labor and later assists in the birth of her baby. They are locked up in his store because of an earthquake and by morning he knows that he can’t let them both go.

When a store owner rescues her and helps her bring her baby into the world, Elizabeth Donovan knows that she has received a Christmas miracle in more ways than one.

Christmas Bride – Behold Your Christmas Baby
To Sandra Butler, Christmas is a time of painful memories that she would rather do without. When her brother-in-law asks her to come to Texas, she does so and finds a great Christmas gift awaiting her.

New Year Bride – A Double New Year Miracle
From the moment her ward was born, Lois Banks had considered Hannah as her own baby. When Hannah sets off for the west as a Mail Order Bride, the last thing Lois expects is for the father of her groom-to-be to send a telegram cancelling the wedding. Angry and concerned about her daughter, Lois follows her to Texas.

Cade Summers loves his son and only wants what’s best for him, even if it means putting a stop to his wedding plans to a woman he’s only corresponded with but never met. But he hadn’t reckoned with the protectiveness of his son’s fiancée’s surrogate mother, or that he was the one who would be losing his heart to the fiery Negro woman.

New Year Bride – The Fruitful Bride and New Year Groom
Lydia Warren finds out that being an heiress is more than she had bargained for when her uncle leaves her an orchard in Beracha, San Joaquin Valley, California. The place is a mess and the workers are set to leave. She has to find a way to keep things together, but the solution is not what she had expected.

Rick Green has done his best as the orchard manager of Warren Orchards but finally has to face the truth that all is lost. When he receives a telegram that the orchard owner is coming to visit, he has no idea that his life and the lives of the workers he’s in charge of are about to change in the New Year.

Preview
Disclosure of Material Connection: Some of the links in the page above are "affiliate links." This means if you click on the link and purchase the item, I will receive an affiliate commission. I am disclosing this in accordance with the Federal Trade Commission's 16 CFR, Part 255: "Guides Concerning the Use of Endorsements and Testimonials in Advertising."