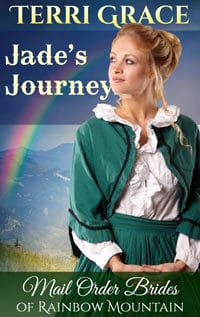 Rainbow Mountain! It was difficult for Jade Fern to believe that less than an hour ago she had been unaware of its existence. As a junior school teacher, she taught her students the geography of their vast country and spent many hours in the library trying to discover new worlds for them to explore in class, but this was something else. She knew that a number of ranges made up the majestic Rocky Mountains that passed through Montana, but she had never heard of Rainbow Mountain.

Jade sat back on her haunches, looked at the numerous boxes in her parents’ attic and sighed. It was a pity that William and Melinda Fern were not here for her to ask them all about Rainbow Mountain and why they had kept such a large number of boxes filled with sheets and sheets of paper. To be fair, a good portion of the papers had belonged to her great grandfather, Justice Fern, whose old trunk she had found among the other boxes.

It was a good thing that school was out for summer holidays and she had enough time to go through her parents’ property and sort out what was important from what had to be discarded.

“Oh, Papa.” She sighed once again, blinking rapidly to chase away the tears that were lurking behind her lids. “If only you were still here,” she thought. “But then, you wouldn’t have done anything.” The house was about to be repossessed by the bank because of a huge outstanding debt that her father owed. For a long time Jade had no idea that she was living in a house that was heavily mortgaged. Her mother had died when she was sixteen and her father followed four years later, after a long illness and depression. She was glad of her job as a teacher because the flexible hours had enabled her to give him the care he had needed until the moment he took his last breath.

But now here she was, stuck with a huge debt, and she was just glad that the bank manager, Mr Bernard Hopkins, was of the old school where a gentleman’s word was his bond. Two days ago he had called her into his office to let her know what was going on. She had met him on one or two occasions when he came to see her father. He had dark eyes that often sparkled with merriment but at that moment had been filled with compassion at what he had to do. He was slightly over five feet tall, and Jade towered over his portly figure.

“When your mother was ill,” he’d told her, “your father mortgaged the house to pay for her treatment. For a while he made regular payments, but when he fell ill the payments stopped. The principal amount has accumulated and it’s quite high….”

Bernard named a figure that made Jade exclaim in dismay. There was no way she would ever raise that money.

“Alternatively, you could take up the mortgage and continue paying it. We can work something out.”

Jade shook her head. “My salary as a teacher would never cover the mortgage repayments. What is the other option?”

“If you leave the debt too long then we will be forced to auction the house. You could put the house up for sale. It is a nice house in a good neighborhood, so it should fetch you a tidy sum. If you want, I can handle the sale for you.”

Jade had sat silently for a long time, pondering her fate. She had been born in the house and it held very beautiful memories. Even though her mother had been dead for six years, sometimes Jade imagined she smelled the sweet aroma of freshly baked pastries and bread, as well as the strong coffee that her father had loved so much. As she grew up, she found it odd that her father loved his coffee so much, when most people in Boston drank a lot of tea.

“I can give you a few days to think about the matter, but you need to move fast or else I may not be able to help you. Selling will ensure that you can keep some of your parents’ things that are important, and I’ll make sure I get someone to pay an amount that will cover the debt and leave you something for another place to live. What do you think, Miss Fern?”

“There’s nothing to think about. Unless a miracle occurs and I can get the money immediately, the house cannot be saved. I would be most grateful if you could arrange the sale. There’s much to clear; do you think the new owners might want some of the furniture?”

Bernard shook his hoary head. “I really have no idea. I could ask, and if someone is interested, of course, the price will go up. If, however, the buyer does not want the furniture, I could also arrange for a second-hand dealer to look at them and assess their value for you.”

“That would be helpful. Thank you so much.”

Then, just that morning, Bernard had sent one of the messengers from the bank with a letter telling her that someone was ready to buy the house with its furniture. It was a couple with three children, and though they had some furniture of their own, they needed more. They would be coming by in two days’ time to view the house and see the furniture. Jade had been putting off going through her parents’ things but now she had no choice.

When her mother died, her father had been unable to get rid of her things. Sometimes Jade would find him weeping as he held some of her possessions. She tried to convince him to move on but he would not have it, so here she was, having to sort through so many things.

The attic was the first place she started, because she knew it had a lot of unused items, but she had not expected so much junk.

“The attic won’t clear itself up,” she muttered to herself. “You’d better get down to work if you have to finish everything in two days.”

They called him the boy with the golden hands, but Julius Neil always shrugged it off. A person did what he had to do, and if he benefited from whatever he did, then good enough. At twenty-eight years of age he was restless and he knew it. His head wrangler said the faraway look was back in his eyes as if something was calling out to him. His family was used to Julius leaving home for long periods of time, and each time he returned, he was richer than when he left.

From the ridge where he had stopped to rest, he looked down into the valley at the large house his father had built. Sometimes he felt like the walls of the mansion were closing in on him and during those times he would get his horse and ride out. Even though he loved life’s comforts, he always prided himself on being a man of simple tastes. Julius was just as comfortable sleeping on his large, soft bed as he was bedding down on a thin mattress in the wilderness. He ate whatever was set before him, having learnt the tactics for survival from Old Willy, their wrangler. The man seemed ancient and full of wisdom and had looked after Julius from when he began to walk. Old Willy had been his maternal great-great-uncle’s friend and when George Oat died, Willy had come to live with the Neil family.

Julius had loved his Great-Uncle George and sometimes he remembered the stories the old man would tell him of a land far away from Pendleton, Oregon – a mountainous land where people’s dreams were either made or shattered. His relative particularly talked about a foolish young man named Seth MacLeod, who had left everything behind in search of a dream that he probably never found – George Oat would have heard of it if he had.

As he rode the range on The Beast, his large black stallion that would not allow anyone else to handle him, Julius knew it was time for him to go in search of adventure. He had been to New Mexico, Texas, Wyoming, Idaho and Utah and now he felt it was time for him to take a trip to Montana and see the mountains that his great-grandmother’s brother had often talked about.

His mother often said he was bitten by a wander-bug but he was thankful that she never stood in the way of him seeking new pursuits. His father would merely grunt and say that when the boy was ready to settle down he would do so.

Julius rode back to his parents’ house and found his mother in the large kitchen. As usual, she was baking cinnamon rolls and bread, which she supplied to the mercantile owner in town.

“You’re back early,” she commented as he picked up a hot roll. “Is everything all right?”

“Mama, do you remember that little wooden box that Great-Uncle George gave you? Do you still have it?”

Emelda looked at her son, a frown on her face. She was a beautiful, middle-aged woman and he had her grey eyes and light-brown hair. She was tall and strong – a good horsewoman who could hold her own on their large, three-hundred-and-twenty-acre ranch. When Emelda married Glen Neil she had also applied to be allocated her own one hundred and sixty acres of land and together they had worked to make the place prosperous.

“What do you want that old box for?” she asked. “It contains nothing more than a few old papers that belonged to George. There’s nothing valuable in there, I tell you.”

“Humor me, Mama.  Well, it must have been important to the old man, otherwise he wouldn’t have given it to you for safekeeping – whatever that meant.”

“Well, Old George was a strange one, especially after his son David died. He was never right after that. It’s somewhere in the attic.  You’ll will have to look for it. And while you’re up there, could you find out if there is a trunk of some old tablecloths your grandmother left me? I may be needing them and have been saying I will get them, but there is too much to be done.”

“All right, Mama. Let me go up there and see what I can find.”