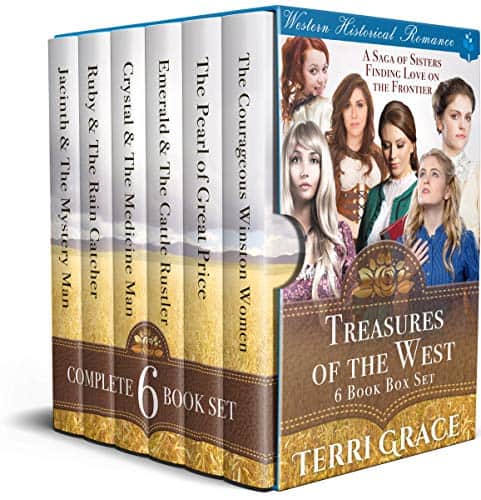 Full 6 Book Boxset Free To Read On Kindle Unlimited Join the Saga of the courageous Winston sisters and an amazing tale of God’s providence and protection as they forge their lives in the days of the pioneers.Treasures of the West follows the fortunes of the brave sisters, and how they find strong... 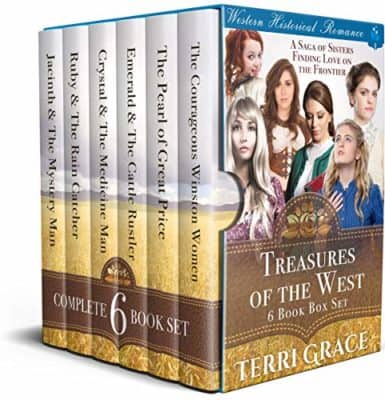 Join the Saga of the courageous Winston sisters and an amazing tale of God’s providence and protection as they forge their lives in the days of the pioneers.Treasures of the West follows the fortunes of the brave sisters, and how they find strong, God-fearing husbands despite the challenges that stand in their way.

A bitter widower and his five daughters live on their derelict farm out in Little Chapel, rural Philadelphia. Things seem like they will never change until their estranged uncle George Winston steps in to rescue the situation. Is he a benevolent benefactor, or does he have some ulterior motive for coming into their lives, especially when they lose their father soon after his arrival?

The Pearl of Great Price

When Pearl Winston and her sisters move to Fort Walla Walla after their father’s death, she is eager to settle down on the farm they have purchased. But settling down is proving difficult because of one of the cowboys who has been hired to take care of their new flockherd.

As the bravest of the five Winston sisters, Emerald is happy when her family moves to Fort Walla Walla. She also soon realizes that her heart isn’t shut up to love when a mysterious cowboy rides unexpectedly into her life. She is confused because he isdefinitely not someone she should be thinking about, but her heart is like a filly willfully running in every direction.

Crystal Winston longs to meet a good man who will cherish and adore her, but her fears keep her heart hidden. Daniel’s pursuit of his family’s slayers consumed him. Heartbroken, wifeless and childless he now seeks a new beginning.Both are looking for something, or someone, who will complete the loneliness they feel.

Ruby Winston is filled with dreams of romance and freedom. As the youngest Winston sister, seeing her siblings find good honest men has fired her heart to find ahusband of her own, but the walls of yesterday seem to stand in her way.Sheldon Warner, a young man seeking a new beginning, seems to be the perfect candidate for Ruby, but a haunting ghost his past threatens their happiness.

As the last Winston to find a husband, Jacinth isn’t really searching for love because she loves their new farm. Her greatest fear is for a man to come into her life and take her away from Amethyst Farm and her beloved family. But a stranger who comes to Fort Walla Walla leads her to search for answers. Who is he and why has he been asking about her and her sisters?

Read Treasures of the West today for an unforgettable journey you will never want to end.