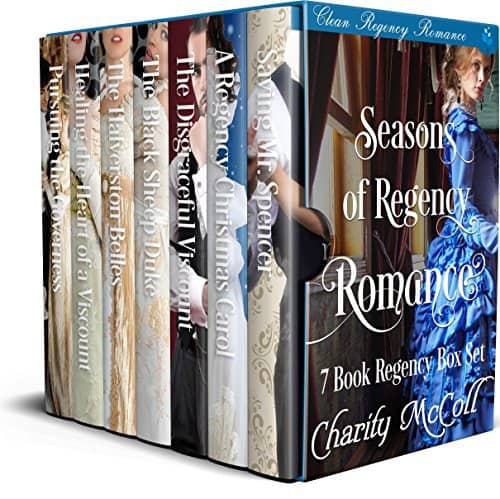 A sumptous collection of seven Regency favorites from bestselling Regency author, Charity McColl.Over 100,000 words to enjoy....Included in this lovely box set:A Time For Beauty - Saving Mr SpencerBeauty and bitterness, family and faithfulness, hidden hearts and stolen hopes - all meet together in t... 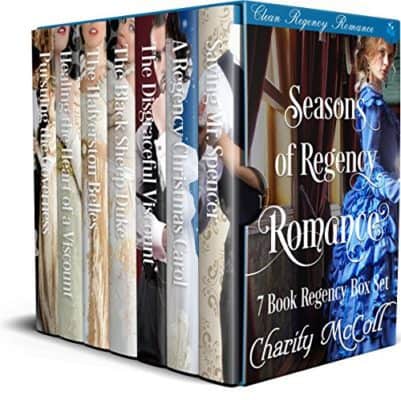 Included in this lovely box set:

A Time For Beauty – Saving Mr Spencer
Beauty and bitterness, family and faithfulness, hidden hearts and stolen hopes – all meet together in this clean regency tale telling the salvation of one man’s hardened heart.

A Regency Christmas Carol
A simple Christmas story told by a destitute widow changes the heart of the very cold and embittered Lord Henry Carrington and the magic of the season brings love to two lonely hearts.

The Disgraceful Viscount
When Virginia is brutally rejected by the man she has loved for as long as memory serves her, she flees to the comforts of her aunt and uncle in London – a decision that unexpectedly leads her to the front lines of the Napoleonic wars. Little does she know that the war for heart will also be won there!

Lady Catherine and the Black Sheep Duke
Duke Marcus Creighton, the black sheep of his high born family, is unconvinced that the lovely, gentle governess, Lady Catherine, has a murdered his lecherous brother. He’s determined to solve the murder and save Catherine from the gallows. As he delves deeper into past family secrets, his efforts to save the woman he has fallen in love with puts his own life in danger.

Lord Oliver and the Halverston Belles
The outrageous Isabella, the youngest of four daughters of a penny-pinched baron, decides that, to alleviate her father’s purse, she will not make her debut in society as her sisters, the Halverston Belles, have done, but she will become a governess and make her own living. Her family, while used to her untamed tongue and opinionated pronouncements, are nonetheless dismayed by her announcement. To change her mind, they enlist the help of Lord Oliver Westminster, the wealthy younger son of a marquess, who has long been regarded a member of the Halverston family. Lord Oliver has his own reasons for setting about this task, but he is well aware that Isabella has not a single thought of him as a potential husband. Can he persuade her to give up her firmly-set notions before her disregard for the ways of Society damages more than her own future?

Healing the Heart of a Viscount
An unattractive heiress, a dying Viscount, a desperate mother, and a father who fears for his daughter’s virtue – all play out passionately against the backdrop of societies expectations. A clean regency story of true love risen from the grave.