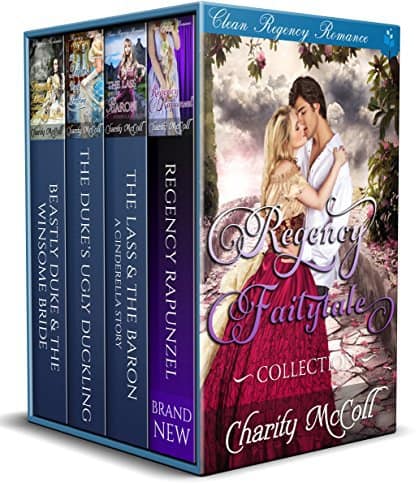 *** 4 REGENCY FAIRYTALES IN 1 - Free to read on Kindle Unlimited - Includes Brand New 'Regency Rapunzel' *** This delightful regency take on classic tales such as the ugly duckling, Cinderella or Beauty and the Beast is the result my love for such timeless stories. This special collection also inclu... 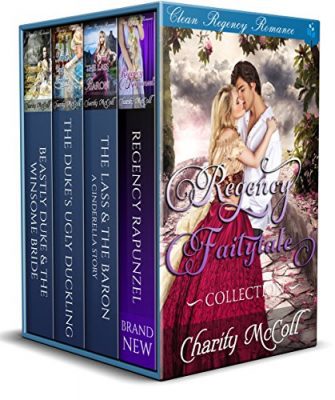 *** 4 REGENCY FAIRYTALES IN 1 – Free to read on Kindle Unlimited – Includes Brand New ‘Regency Rapunzel’ *** This delightful regency take on classic tales such as the ugly duckling, Cinderella or Beauty and the Beast is the result my love for such timeless stories. This special collection also includes the never before published Regency Rapunzel!

69,600 words of sumptuous clean Regency Romance, with a fairytale twist! Free to read on Kindle Unlimited.

Included in this delightful bumper boxset:

A young woman, Lady Cheryl Crompton, fights to get out of a forced marriage and in her desperation decides to disfigure herself by cutting off all her hair. Her father is so incensed that he locks her up until it grows back again. Will the man she has loved for so long come to her rescue? And how? Practically forced into the arms of her undesirable suitor by her father, a drastic escape plan is forged that leads to consequences even our young Rapunzel, Cheryl, could never have anticipated.

Florence Knightley is shamelessly rejected by her own mother. She despises her daughter’s blemished looks. Such an ugly duckling is a shame to the house of Knightley among society’s more refined peers.

When the young woman turns eighteen her father decides it is high time his daughter marry, but who would even consider such an imperfect girl?

It is a troubling question.

A passing reference in Regency court to the reclusive Lord Albert Errol, Duke of Whittington, provides a solution. Stewart Knightley approaches the mysterious Duke with an offer to restore his lost fortunes. In return he will take the hand of Florence.

Thus begins an unlikely journey that will transform the duckling to a swan.

In this original Regency fairytale the classic parable of the Ugly Duckling takes a decidedly romantic Regency turn.

Samantha Sykes is a beautiful young woman, but her life is ugly. Her wicked stepmother, twisted with jealousy, arranges a marriage for Samantha with a rich, arrogant and cruel man.

It only the actions of her concerned father that save her from this fate worse than death.

Or so it seems, until she discovers that her father’s plan is to send her hundreds of miles away to Lord Callum’s castle in Inverness, as servant and cook to a disfigured beast of a man, hidden from all but those who dare enter his maternal grandfather’s home.

Which is worse? Marriage to a monster, or servant to a beast?

In this original Regency fairytale the classic tale of Beauty and Beast takes a decidedly romantic Regency turn.

The Lass & The Baron: A Cinderella Story

Humble and beautiful, Isabelle Sanders sacrifices all to take care of the village orphans, much to her proud mother’s disdain.

When the pompous Lord Miles Spencer and his troops parade the street each day, Isabelle’s wards eagerly wave, but the young soldier shows nothing but contempt for the poor urchins – until he sees their keeper.

Who is this hidden beauty, and why is she wasted on the village rabble?

Miles determines to discover her and have her for himself, but Isabelle takes utmost care to hide from his advances.

Driven by a growing love, the Lord’s heart is warmed and melted as his search continues, until the real Miles Spencer finds more than he bargained for – true love and a brand new future.

In this original Regency fairytale the classic tale of Cinderella takes a decidedly romantic Regency turn.