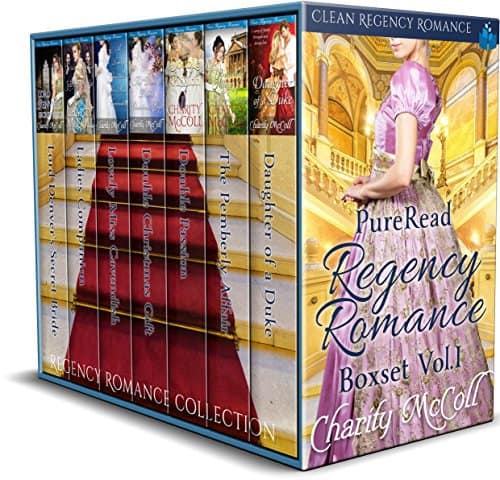 A Sumptuous Regency Collection to bring the beating heart of Regency England to your reading times. 7 books in 1 - a marvelous bargain boxset for lovers of clean Regency Romance.Daughter of a DukeLady Amelia knows that it is her duty to provide a son and heir for her husband, the Duke of Hertfordshi... 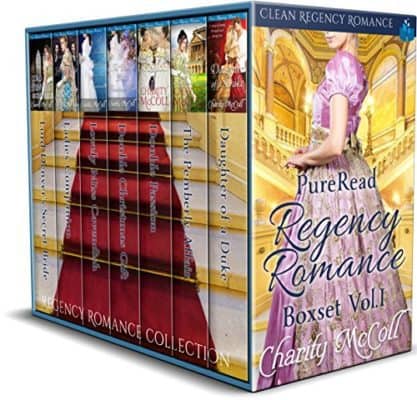 A Sumptuous Regency Collection to bring the beating heart of Regency England to your reading times. 7 books in 1 – a marvelous bargain boxset for lovers of clean Regency Romance.

Daughter of a Duke

Lady Amelia knows that it is her duty to provide a son and heir for her husband, the Duke of Hertfordshire. But she has only produced daughters and the Duke has threatened to find another woman who can give him a son. Her questionable plan to switch children should she birth another daughter leads to romantic dilemmas when her substitute son falls for her forsaken daughter!

When lizabeth Bennet Darcy is asked to chaperone the rebellious daughter of Lady Descartes, Elizabeth is hesitant to take on the responsibility, particularly when the young lady takes an interest in a young man who has been disinherited by his father because of his ambition to become a poet.
Ultimately, the drama must be resolved at a gathering at Pemberley, at which the redoubtable Lady Catherine de Bourgh, Mr. Collins and his wife, Elizabeth’s friend Charlotte, the Bingleys, and the warring parents of the young couple are present for a confrontation that tests Darcy’s trust in his wife and Elizabeth’s confidence in her role as the mistress of Pemberley.

Two men…one an honorable but poor soldier…the other an aging Lord looking for a wife.
Sophia Burton and Linda Hawkes face a dilemma as they consider their future, and the men who will stand by their side. Neither are ready to concede to an arranged marriage that chains them to convention and misery.
Can they step beyond their fears and find a way to true love and lasting happiness?

Elizabeth Saville knows how to tame the antics of young twin boys, but can she tame the beating of her own heart when their father, the brokenhearted Duke of Salisbury, approaches her with more than a governess for his boys in mind. Finding a governess for the boys proves really tough because they are naughty, but when Elizabeth Saville comes to take care of them, they’ve more than met their match.

A Lovely Christmas For Miss Cavendish

When Miss Cavendish mistakes a Christmas Eve visitor to the orphanage for the volunteer who promised to assist her, little does she realize the man she has put to gritty labor is the high-born Earl of Ipswich. This unusual eve has revelations in store that neither she nor Earl Crampton could ever have imagined…

Elayne Stanton moves to Ayrshire Park as companion to Baron Cedric Tawnish’s bedridden wife. The Baron’s attraction to young Elayne is apparent and flaming tongues spread unfounded rumors about Elaine’s unchaste conduct in the Baron’s arms. None of it true.
Despite the rumors the Baron conducts himself honorably towards Miss Stanton, until one night he stumbles into the house with apparently lascivious intentions toward the innocent girl. One moment upstanding and honorable, the next brazen and boorish, the Baron tumbles into behavior that seems like he is two different men.
What will transpire as Elayne discovers the secret behind the Baron’s seeming double standard?

Alana Moreau, a simple French milkmaid overhears a late-night conversation that means life or death for the veritable Lord Denver, an associate of the Duke of Wellington.
Her warnings are shrugged off as the delusions of a frivolous woman. Until the dastardly act almost takes Denver’s life.
Only because of the resourcefulness of Alana and Lord Denver’s valet does he survive.
Is there a connection between the heiress and the attempt on his life? And will Lord Denver choose a poor French maid over a beautiful rich lady?