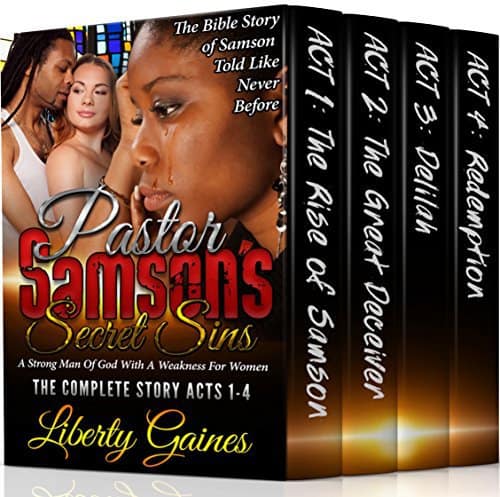 Pastor Samson’s Secret Sins: The Story Of A Strong Man of God With A Weakness For Women

ALL FOUR SHOCKING ACTS IN THIS MODERN DAY TAKE ON THE STORY OF SAMSON!

ALL FOUR SHOCKING ACTS IN THIS MODERN DAY TAKE ON THE STORY OF SAMSON!

Sam Jackson, anointed miracle child of elderly parents, is destined for greatness, and he knows it. And so do the women who want to share his bed.

His rise to power is unprecedented. Not content to be just a man of God, Sam (or Samson as he likes to be called) decides he must be the man of God – the only one – and will go to any lengths to remove any who stand in his way, especially meddlesome fellow elders and pastors in the city.

And Samson’s predatory plans do not stop there – his designs are not confined to the pastors and leaders of the city, he wants their wives and their money too.

Will the tempering presence of Sam’s Spirit-filled praying wife, Precious, be enough to prevent Samson’s pride consuming him completely? Will the angels she commands by her warfare over his soul stand the onslaught of the enemy?

Infinite blessing and eternal stakes, selfish pride and selfless prayer, infidelity and infidels – Pastor Samson’s Secret Sins will have you shouting in protest and shaking with prayer for our reckless hero and his long-suffering wife.

Although tackling strong subjects such as infidelity, murder and greed head on, all of the books in the Pastor Samson series are clean, Christian, and contain no inappropriate sex scenes, bad language or blasphemy.

Pastor Samson Jackson turned over between the silky sheets with Candy the prostitute, his regular Thursday lunch date, snoozing by his side.

Samson, the untouchable anointed of the Lord, above the laws of men and of God.

But his sins are catching up with him. The whirlwind of Samson’s life swirls around him – His jilted former lover, Madeleine Stone, angry city pastors intent to redress the abominable balance of Samson’s lies, even his former heavy, Jimmy Fox – all are out to undo the proud pastor.

All the while his loving wife refuses to let him destroy his life – praying, fighting, fasting.

Samson too has his battle plan drawn up, but not a spiritual one. He knows that there’s dirt to be dug, and he plans to throw it to the fan in front of a national audience. Little does he realize that there is one more weapon in the enemies arsenal, and she’s sitting in the pews ready to pounce.

‘Sharing the power of witchcraft in a misguided world. Delilah Deboya, licensed and experienced witch.’ The same Delilah now sitting in Pastor Samson’s lap, claiming to be saved by the blood of the Lamb. The same Delilah with $11000 in her pocket, and the promise of more if she undoes this man of God forever and for good.

Candy the prostitute, carrying Samson’s illegitimate newborn, cradled by the care of Samson’s own wife, Precious, who refuses to let her husband’s infidelity ruin yet another life.

Soon the house of cards will come tumbling down and Samson will be left alone to face his sins. Can the same God who called him from the womb now save Samson from himself?

Will Precious’ love and faithful prayers finally bring her husband home to her arms, and to the arms of His Savior? Or will the wages of sin finally catch up with Samson Jackson?

The thrilling conclusion to the the Samson series unravels in a shocking turn of events. Will the life lessons that the bad boy of the Bible has learned the hard way lead to a Godly end, or is this wayward preacher beyond the outstretched arms of love? 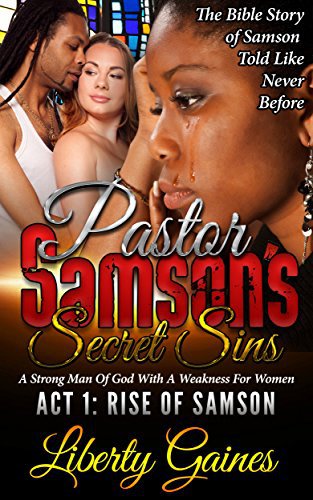 Pastor Samson's Secret Sins ACT 1: Rise of Samson: The Story Of A Strong Man of God With A Weakness For Women
Copy link
CopyCopied
Powered by Social Snap