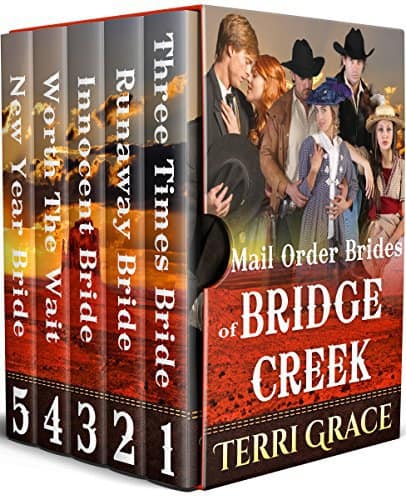 The Mail Order Brides of Bridge Creek follows the unexpected journey of Erin Hathaway, Bernice Hallstead & Flora Wright who are rescued from Boston’s criminal underworld by a kind and courageous widow named Edna White. Edna sends the young ladies West to marry strong faithful men whom she knows will properly care for her wards. Each book is a complete story of one of our Bridge Creek brides.

When Erin Hathaway is thrown out by her parents and abandoned with child by her dishonest husband, she is taken under the caring wing of of the widow, Edna White.

When Edna dies, her will provides for Erin and her young son, Trevor, in a most unexpected way.

To fulfil the will’s requirements Erin must travel West to meet and marry again the man who abandoned her 6 years earlier.

Flora Wright’s mother has always wanted to be part of Boston’s elite, and is wiling to stoop to any measure to make it happen – even promise her 16-year-old daughter’s hand to Archibald Channing, a vile old man of questionable morals.

When Flora flees after uncovering Archibald’s illegal dealings, she is taken under the caring wing of the courageous widow, Edna White.

When Edna dies, Flora travels West with her two friends to meet a man of Edna’s choosing whom she is to marry.

The Innocent Bride – The Story of Bernice Hallstead & Raymond Bridges

Bernice Hallstead and her younger brother lived a charmed life, until their beloved pa dies an untimely death. When their mother remarries the new man of the house forces the two children into a life of petty crime.

A bungled robbery leaves the young wards injured and homeless, fleeing for their lives. Terrified Bernice is taken under the caring wing of the courageous widow, Edna White.

When Edna dies, Bernice travels West with her two friends, Erin and Flora, to meet a man of Edna’s choosing.

It is only the power of unconditional love that has the strength to wipe away the shame of yesteryear and open the door to a bright tomorrow.

Worth the Wait by Annie Boone

Lenora Lawson has an ideal of what a marriage should look like. From the inside of the orphanage, she’s certain she’ll never have what she saw her parents share. She’s trying to figure out where to go and how to get there. She’ll be forced to leave the orphanage soon and she’s happy about that. She’s got to have a place to go when the time comes.

She’s daydreamed about adventure and the ability to make her own decisions. Living life on her own terms is just a fantasy. For now, anyway.

She agrees to marry Jackson Brodie, a cattle rancher in Kansas, when she gets into an argument with the headmistress in the orphanage. She’s sure she’s got no other options. She’s sad and angry, but decides to enlist his agreement that they’ll have a marriage of convenience.

He agrees, and all seems to be well, At least on the surface. What could go wrong when two people fall for each other when neither of them wants to be in love? Find out how this young couple figures out the way to true adventure.

Abandoned by the man she thinks to be her God given partner, Salome Newton travels west to track him down. A trail of destroyed families, robberies and broken promises uncover that he is, in fact, an untrustworthy wife stealing huckster.

Her heartbroken search leads her finally to the small town of Pine Wood, and to the storm lashed Starry Stud Ranch. Waiting there are two bruised but trusting hearts, believing God for a New Year’s day miracle. 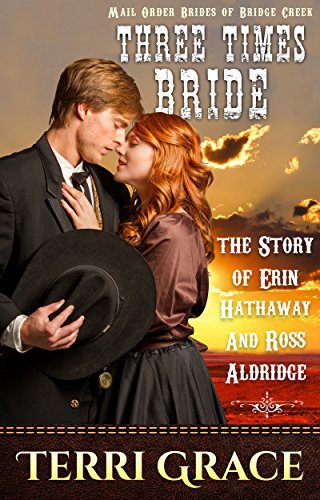 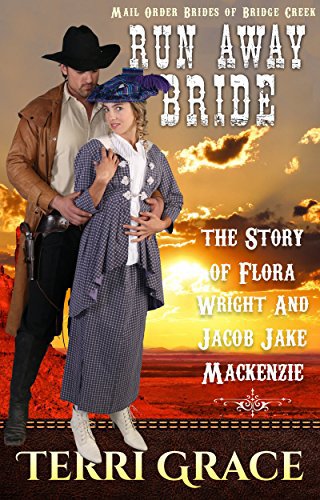 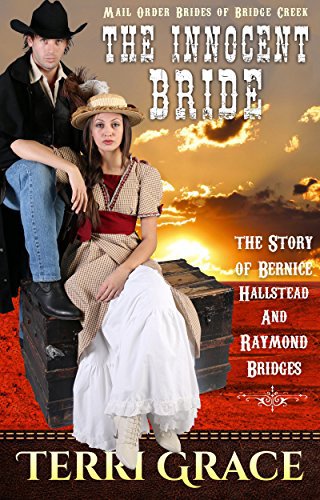