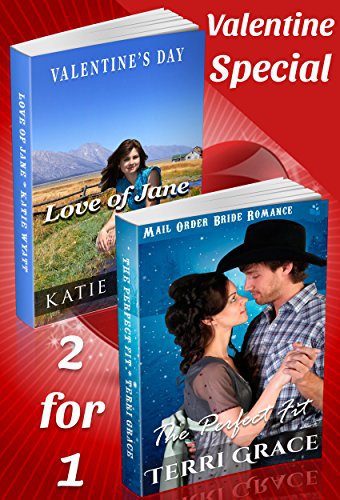 *** 2 For 1 Mail Order Bride Valentine Special *** from Bestselling Western Historical Romance authors Terri Grace and Katie WyattThe Perfect Fit by Terri GraceSophia Franklin, plain, bookish, and unable to find a husband, is heading west to take up a position as a schoolteacher. On the journey, sh... 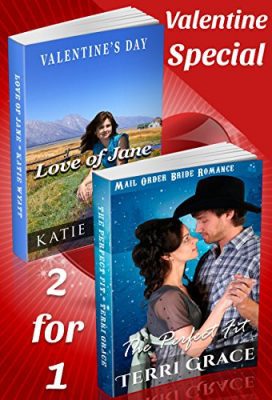 The Perfect Fit by Terri Grace
Sophia Franklin, plain, bookish, and unable to find a husband, is heading west to take up a position as a schoolteacher. On the journey, she gets to know the girl in the seat next to hers: Sarah March, a mail-order bride off to marry a man she has never met. Sarah convinces Sophia to try on her engagement ring, an heirloom of the family she’s to marry into.

Sophia does so, reluctantly, but while she has it on her finger, the train derails and Sophia is badly injured.

Anthony, Sarah’s fiancé, hears about the derailment and heads out with the other men to help. He finds Sophia trapped underneath some wreckage, and talks to her in her delirium until she is rescued. He immediately recognizes his ring and thinks that Sophie is his bride-to-be.

When Sophia wakes up ten days later, she cannot remember who she is, but Anthony’s descriptions of Sarah March’s personality and tastes, known to him by her letters, don’t seem to fit Sophia’s own. Nevertheless, she and Anthony rapidly fall in love.

Will Sophia ever regain her memory, and what will happen if the real Sarah March ever turns up?

Love of Jane by Katie Wyatt

Jane Reynolds is deliriously happy as she is about to marry her childhood sweetheart on St Valentine’s day. Tragically, her beau is killed in a wagon accident just before the wedding. Jane sadly packs her dress away and sinks into a deep depression. A year passes, and Jane’s mother takes things into her own hands – she hates seeing her previously happy daughter in such a state and wasting her life away. She arranges for Jane to travel across the country to the gold rush town of Sacramento to marry a man she has never met. Jane is appalled, but her mother wisely knows that all Jane needs is a new start, a good person to care for, and an adventure to get her back on track.

Can Jane bring herself to love again?

What tragedy awaits on St Valentine’s Day, and how can fate be so cruel as to allow her to lose two men on this day of all days?

Has Jane discovered too late that she loves William?

All Jane can do is have faith that in time William’ will recover from the tragic accident and they can finally embark on their life together as a loving couple. But what if he never fully recovers? Is she destined to unrequitedly love this ghost of the man she once knew for the rest of her days?

Come out West to the fledgling town of Sacramento, California. Take this wild adventure is a romantic ride with Jane. See if she can recover from what fate has in store for her. See if she does find that true love, and what’s critical in life? Be on your guard for some family friends in this wild West tale.