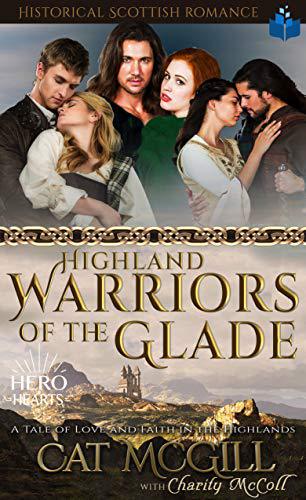 Highland Warriors of the Glade 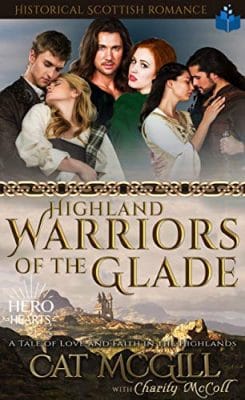 Highland Warriors of the Glade invites readers into a thrilling Scottish historical adventure – A clan father, 3 brothers and their wives – and an incredible event that forces the passionate warriors into a love story that breaks the bonds of time!

Act 1 – Highland Warriors of the Glade

Bran MacChonaill has three sons. Each of them a worthy leader of the clan, and true warriors of the Glade.

But even the most valiant Scottish warrior could not be prepared for what was about to happen. The brothers are used to battle. Little did they know they were about to enter an arena bigger than they could ever have imagined.

When the love of your life disappears away in a mysterious and seemingly supernatural storm what do you do?

For Toby, William and Hamish the only answer is to rescue their wives – and the search begins right where the mystery began – the Glen of Oaks.

Skye O’Cain, the deep love of highland warrior, Toby. The lovers are thrown into an epic adventure more rugged and mysterious than the hills and Scottish mountains they once called home. An home is where they long to be right now – but not without each other!

Thankfully Skye is a warrior spirit just like her betrothed Toby, and all of her skills of wisdom and courage are called upon when she finds herself inexplicably on a Viking ship.

When the love of William’s life mysteriously disappears in a storm, all of his highland instincts are called upon to find her.

The journey takes him much further than any human mind could ever imagine, throwing him into a gladiatorial battle for his own life, and the heart of the woman he loves.

Act 4 – Hamish: Wolves of the Future

When the love of Hamish’s life mysteriously disappears in a supernatural storm, all of his highland instincts are called upon to find her.

The journey takes him much further than any human mind could ever imagine, throwing him into a future war. His wits and courage are his weapons, but true love is the force that drives him forward!

Highland Warriors of the Glade is a Christian highland adventure that reaches far beyond the bonds of time to deliver a tale you will never forget.

If you enjoy Scottish and Historical romance with adventure, mystery, and messages of deep faith and true love you will want to start reading right now.

Buy Highland Warriors of the Glade today and be carried away into a historical adventure that spans the centuries of time!

HERO HEARTS is a multi-author series featuring both historical and contemporary Christian romance. Join Annie Boone, Hayley Wescott, Natlie Dean, Cat McGill, Terri Grace, and Kate Cambridge in a world unlike any other; a world where Heroes are honored with unforgettable characters and beautiful, Christian love stories.

The authors of this series are committed to writing stories of faith, hope, and love centered in fictional heroes who sacrifice daily to protect and save. A mix of historical and modern-day.

**The HERO HEARTS series books can be read in any order.