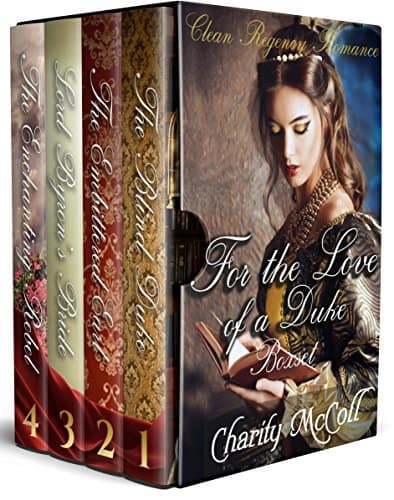 For The Love of a Duke Boxset: Clean Regency Romance

Four Sumptuous Clean & Wholesome Regency Romances in One Stunning BoxsetA blind duke robbed of his dignity saved by a simple maid, an embittered Earl swept from his feet by the nanny of his forsaken child, a Lord laid low lifted from despair by the miracle of love, and spies, lies and disguise as a ...

A blind duke robbed of his dignity saved by a simple maid, an embittered Earl swept from his feet by the nanny of his forsaken child, a Lord laid low lifted from despair by the miracle of love, and spies, lies and disguise as a Captain uncovers the true love his heart has been longing for along. Four wonderfully unexpected regency stories in one delightful collection for the very first time.

Can a blind duke robbed of all but his dignity find it in his heart to allow a common tenant girl, Alana Carrington, to raise him from despair.

Grant, Duke of Herefordshire, has lost more than his sight – he has lost hope of ever seeing love or life again. After returning from the American war to find his once thriving estate ransacked and abandoned by his own servants, he is left to die a lonely death within it’s dark walls.

It is only when he stumbles into one of his estate tenants, Alana Carrington, that the light begins to break through.

Will the Duke’s former glory be restored to him and his duchy, and will Grant once again move in society worthy of his station – and when he does will he remember the gentle Alana, a mere commoner, and all she has done for him?

When Lord Richard Trenton is summoned to the side of his dying wife, he is certain of what the servants only suspect: the child she is birthing is not his own. Never one to shirk duty, Lord Trenton hires a nanny for the little girl, but the baby’s presence causes him such pain that he banishes her and her nanny, Edith, to the nursery.

Edith, familiar with the horror of abandonment, gives the baby all her love and care. Little does she know that Lord Trenton sees it all.

When Lord Trenton is summoned to London on business, Edith overhears a conversation and learns the baby girl is in danger from one of her blood relatives. How will Edith get the baby safely away? Where will she go? And will Lord Trenton follow them?

Lord Byron Whittaker is a true catch. He’s as thoroughbred as the stallions he loves to ride. Betrothed to the lovely Lady Sophia, his life really is to be envied…until the day he is thrown from his uncontrollable horse.

The once vivacious Lord, now a paraplegic, loses all hope. Worse, he loses his fiancée. His perfect existence comes crumbling down around him, and the only person able to handle this changed, angry man is his gentle yet firm caregiver, Cecilia Fountain.

Charged with his private care, Cecilia helps Lord Whittaker on his road to recovery. And recover he does – so swiftly, in fact, that he soon finds himself back in his old life, forgetting the woman who put up with him and loved him in secret during his darkest days.

Rejected, Cecilia returns to work at the hospital. Unable to forget him, though, she dreams of one day being back in the arms of the first man she ever truly loved….

Captain Gordon Links is no stranger to conquering armies. But when one young woman, Noelle, conquers his heart, he is defenseless to resist.

Labeled a traitor, and smuggled from France under Gordon’s care, Noelle falls for the noble soldier – but their proposed union is challenged by none other than the regent himself, and by the demands of title and wealth that are unexpectedly thrust upon the Captain’s shoulders.

Will loyal Links, so long bound and driven by dedication to the crown, now find that he must be loyal to his own heart instead? Can he forsake wealth and title for the riches of love he discovered in the lady he was charged to protect?