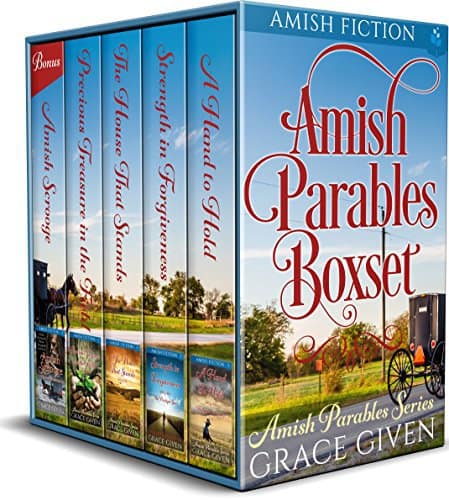 SPECIAL BOXSET EDITION - All four Amish parable stories PLUS bonus Christmas tale! Enjoy!The complete collection of stories inspired by the timeless and true parables of Jesus - plus an extra tale.A Hand To Hold – The Good SamaritanAmos Schwarz and his best friend Caleb are tasting the delights of... 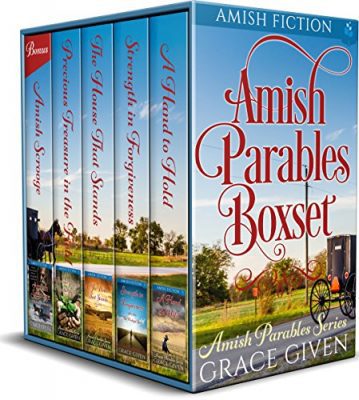 SPECIAL BOXSET EDITION – All four Amish parable stories PLUS bonus Christmas tale! Enjoy!
The complete collection of stories inspired by the timeless and true parables of Jesus – plus an extra tale.

A Hand To Hold – The Good Samaritan

Amos Schwarz and his best friend Caleb are tasting the delights of running around in the wild world of the Englisch; cafes, bars, music and other forbidden delights.

One thing about this world that they do not savor though is the relentless harassment and ridicule of Justin Roberts, a merciless bully.

But what will happen when, after moinths of taunting and abuse, the two young Amish men discover Justin beaten and left for dead in an alleyway?

Will Amos become a good Samaritan, or walk away like Justin’s so called friends and the local priest?

This moral tale is based on the parable that Jesus told of The Good Samaritan, and adds a decidedly Amish twist to the tale.

Strength In Forgiveness – The Prodigal Son

Levi Hansen returns from Rumspringa with one thing in mind – to return to the world and enjoy more of its sinful delights. He approaches his father stating he plans to leave the community for good, and despite his broken heart, Benjamin Hansen gives his son a sizeable sum of money and some stern but wise advice to begin his new life.

Soon the money and fair weather friends have flown, and Levi is left to fend for himself; all the way to the empty hog shed.
Will Levi swallow his pride and return to his father? Doubting that his Daett will welcome home his penniless son, Levi searches for other options until he finally makes his heart wrenching decision.

This moral tale is based on the parable that Jesus told of the Prodigal Son, and adds a decidedly Amish twist to the tale.

The House That Stands – House on the Rock

Seth Beiler is a man focused on building his life with purpose through his strong faith in God. He is a widower with two small children and has fallen in love again with Rachel Hess. She loves Seth but is held back by her devotion to her ailing parents.

Rachel’s irresponsible brother, Daniel, lifts not a finger to help his sister nor encourage her dreams.

It takes and accident at work for Daniel to realize that he faces a decision – follow Seth’s example and build on a solid foundation, or let his old Amish life crumble and throw in his lot with the world outside the community.

This moral tale is based on the parable that Jesus told of The House Built on the Rock, and adds a decidedly Amish twist to the tale. It is one book in the Amish Parables series by #1 bestselling Amish fiction author, Grace Given.

Precious Treasure in the Field

The young Amish man, Amos Stauffer, struggles with an impossible dream. His farm is failing, and despite his gentle wife’s encouragement, Amos’ heart is as heavy as the plough his horses drag through the fields.

Mysteriously, Amos is drawn again and again to a small untended piece of land adjoining his property. It is a plot that hides a aging secret.

Will the treasure in the field solve Amos’ finacial problems? And will it be able to provide relief for his aching heart?

This moral tale is based on the parable that Jesus told of the treasure in the field, and adds a decidedly Amish twist to the tale. It is one book in the Amish Parables series by #1 bestselling Amish fiction author, Grace Given.

The death of his dear wife Gertrude caused Elias Schrock to turn into a bitter, stingy, old man who no longer sees any reason to believe in God.

As a result, the relationship with his only son turned sour and as soon as Elias saw his chance he kicked his son out of the house, hoping to find peace. Instead all he found was more misery.

A famous moral tale with a decidedly Amish twist.