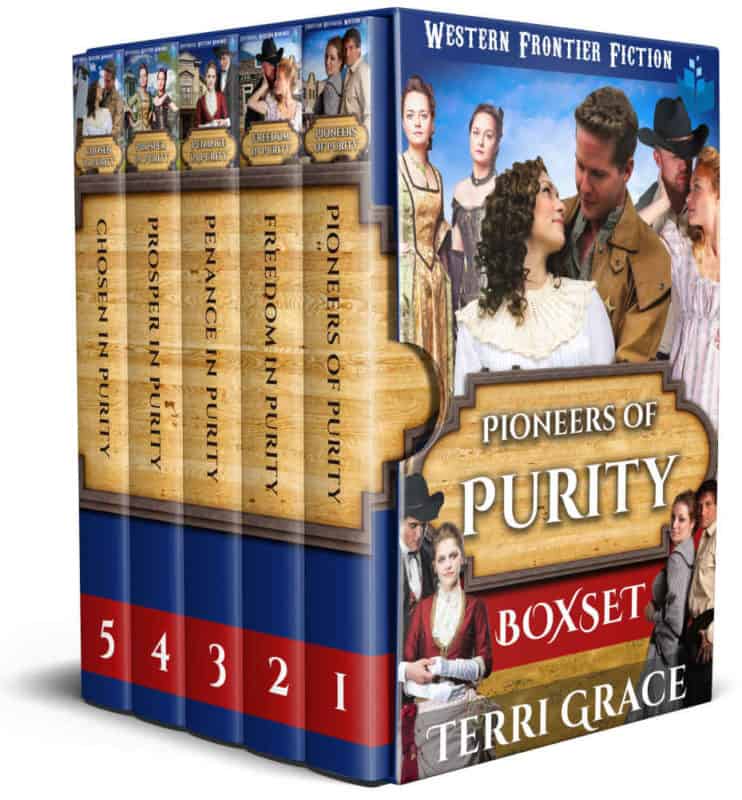 Order Now!
About the Book
Witness the deep conviction and courage of a generation of frontier settlers fighting for the soul of their town, and the loves of their lives. A unique and unmissable 5 book historical Western saga played out across ten thrilling episodes… BOOK 1 – Pioneers of Purity PART 1: EPOCH Pioneering visionaries, Zechariah and Hannah found a fledgling town called Purity, but the town has become corrupt under the influence of the unscrupulous and persuasive, Carlton Swindle. How will Zechariah and the few upright citizens fight the terror that threatens to engulf their lovely town? PART 2: ARBITRATION Rowan Günter has a gold tinted dream, only to see it sour. Could marrying a rich wife turn his fortunes? When Amy’s church friend, Kate, heads out as a Mail Order Bride, innocent Amy joins her but will the train tracks lead to love or does a much more sinister fate await the ladies? BOOK 2 – Freedom in Purity Part 3: EXODUS Kate Lander is accused of killing the deceitful man who brought her to Purity. Deputy Sheriff Caleb Newton doesn’t want to believe that the beautiful Kate could be guilty of stabbing a man, but the evidence is irrefutable. Is he blinded by love, and will his hopes he dashed? Part 4: EDICT Rough and ready Sheriff Franklin Goodwin falls in love with a young widow who has just arrived in Purity. Marigold Pritt does not find Purity as she expected, but her heart is found in the hand of the Sheriff. BOOK 3 – Penance in Purity Part 5: MEMORIES Owen Keller is shocked to find an unconscious woman at the bottom of the cliff on his land. When he finds out who she is fear grips him. Once the most famous girl in Purity, now Sally longs for a different life, but can she find it with Owen? Part 6: LAMENTATIONS Felicia Dawson is angry at God and is resigned to living a terrible life, but when Lameck Guard arrives in Purity both are unprepared for the new life they are about to discover. Part 7: FEATS Naomi Pierce leaves Washington to join her uncle in Purity, but something happens to disrupt her new found peace. Daniel Halstead is a fiery and upcoming prosecutor. When his mentor recommends him for a new job out in Idaho, which is about to attain statehood, he’s reluctant to go there. But he does so, and when he finds out who his helper is, he’s shocked. It’s Naomi, the young doctor whose career he wrecked. BOOK 4 – Prosper in Purity Part 8: DOMINION Jude Weber comes to Purity in search of his father, a vicious outlaw who has caused him so much pain in the past. His wants revenge on the man whose actions have caused so much hurt all around. Reality comes knocking for Blanche and she has to struggle with many misconceptions before she can find her feet again, and in the arms of an unexpected suitor. Part 9: CANTICLES Coming to Purity is a great adventure for Trevor Adams, and especially when he runs across Glenda Swindle, daughter of his intended business partner. But Glenda is determined to stop him from taking her father as an investor and he wants to find out the reason why. This means getting closer to her and when he does, his heart is captured. BOOK 4 – Chosen in Purity Part 10: CHOSEN Samuel Kidder is pastor of Good Hope for All Church but his flock is scared and many have fled the town. Sam believes that he was sent to Purity for a reason and especially because of Miss Candace Parson, the new school teacher. READ THE COMPLETE ROMANTIC SAGA TODAY
Details
Author: Terri Grace
Genre: Western Historical
Tags: Romance, Terri Grace Boxsets
Publisher: PureRead
Publication Year: 2020
ASIN: B089T429V5

Never Miss a New Story… (PLUS Free Books Every Week!)