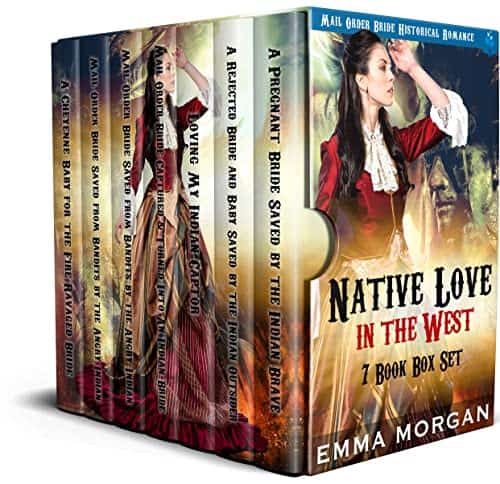 Order Now!
About the Book
Free To Read On Kindle Unlimited, this exclusive box set by bestselling author Emma Morgan brings seven beautiful stories of love and adventure in the Wild West to your heart and hands. Meet seven brave brides and their beloveds in this wonderful and surprising collection. Ready to ride? Grab your copy today and let’s head West… Included… A Pregnant Bride Saved by the Indian Brave Left alone after her husband dies, Essie Holman is desperate to find a safe home for her unborn baby. As a last resort, she answers an ad as a mail order bride, and soon is traveling west to marry a man who seems to only reluctantly want her. But when the coach she is traveling in is attacked, she finds herself rescued by a band of Indian warriors and invited into a life she never expected. And never wants to leave. A Rejected Bride and Baby Saved by the Indian Outsider Newly widowed and with a baby daughter, Sadie McLaughlin has been living on the goodwill of her aunt and uncle. Unwilling to add to their burden any longer, Sadie reluctantly accepts an offer to travel west as a mail order bride—only to find that the man has married another, and does not want her anymore. Alone and hundreds of miles from home, Sadie takes a job at the town’s General Store. And there she meets Dakota Blake, a handsome young Indian whose kindness immediately soothes Sadie’s heart. Mail Order Bride: Loving My Indian Captor Left alone and heartbroken after her husband is killed, Marie Brooks is desperate for a way to support herself and her small son. She is a skilled nurse, but jobs are few and far between now. So, at the advice of an old friend, she accepts an offer as a mail order bride, and soon she is headed west for her new life. However, her plans are shattered when a tornado rips her stagecoach apart, leaving her stranded on the prairie, held captive by a group of Indians in need of her healing skills. Captured and Turned into an Indian Bride When Anna Carpenter’s mother is diagnosed with tuberculosis, Anna’s life changes forever. With her parents forced to move to New York for treatment, Anna feels she had become a burden on her family, and she heads west to find a home as a Mail Order Bride. But Anna’s life takes yet another turn when her stage is attacked, and she is kidnapped by a tribe of angry Indians and held for ransom. Saved from Bandits by the Angry Indian On her way West as a mail order bride, Lucy Stanhope finds her new life may soon come to an end when her stagecoach is attacked by bandits. Rescued by a tribe of local Indians, led by a handsome brave called Angry Bear, Lucy is taken to the Indian village to recover from the ordeal. Although very different from the life she had known, Lucy quickly falls in love with the kind people of the village. Taken by the Fearless Brave Rather than marry a man she does not love—and angry with her father for presuming to choose her—Genevieve Harrison decides to take her fate in her hands, and follow her dreams west. Soon, she bound for California as a mail order bride, set to wed one Mr. Charles Holmes. But Genevieve’s dreams take a turn when she discovers her intended husband is a terrible, abusive man. Unwilling to marry such a man, she runs away, into the woods, where she is captured and brought back to an Indian camp, to be used for negotiations with the settlers. A Cheyenne Baby for the Fire Ravaged Bride After losing her home and parents in a terrible fire, Jessica Wilson believes she’ll never feel joy again. Fearful of being a burden on her cousin, she decides to travel west as a mail order bride. She knows the life will be different, but after her stagecoach is attacked by Indians, she realizes just how wild the west still is. And when she meets her intended’s family—including his infant Cheyenne daughter, she learns just how deep some hatreds still run.
Details
Author: Emma Morgan
Genre: Western Historical
Tags: Mail Order Bride, Romance
Publisher: PureRead
Publication Year: 2022
ASIN: B0B4JT7SCY
List Price: 0.99