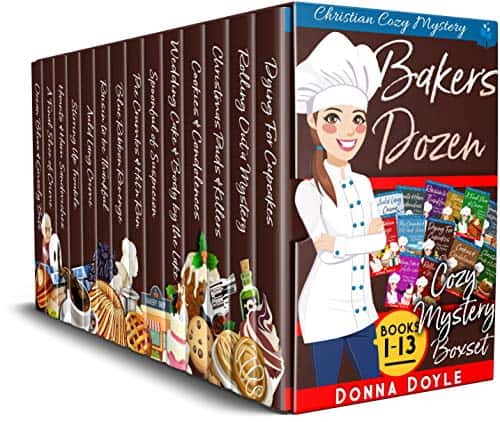 FREE TO READ ON KINDLE UNLIMITED -A Full shelf of Culinary Cozy Mystery with amateur sleuth and master baker, Sammy. Enjoy all 13 Sammy Baker Cozy Mysteries in one massive boxset, plus one extra maritime mystery with Donna Doyle's favorite elderly sleuth, the marvelous Molly Grey.Included in this bu...

Order Now!
About the Book
FREE TO READ ON KINDLE UNLIMITED –A Full shelf of Culinary Cozy Mystery with amateur sleuth and master baker, Sammy. Enjoy all 13 Sammy Baker Cozy Mysteries in one massive boxset, plus one extra maritime mystery with Donna Doyle’s favorite elderly sleuth, the marvelous Molly Grey. Included in this bumper collection of cozies…

A broken Baker running for relief in Sunny Cove. A poisoned cupcake swallowed by the local sheriff. Our sleuthing cook in the crosshairs for the crime!

Rolling Out a Mystery

Reconnecting with old friends seemed like such a good idea, but when a Halloween Party becomes the unlikely scene of a crime, Sammy is thrown again into a Sunny Cove mystery!

Sammy Baker’s confectionaries are a big hit in Sunny Cove, but when a fundraising drive turns into a hair-raising crime it’s time for Sam to don her sleuthing cap again.

Wedding Cake & Body by the Lake

A sneaky waitress and a well-to-do groom acting strangely leave Sammy wondering what’s wrong. When a body is then found by the lake Sammy teams up with Sheriff Jones to discover the truth.

Sammy Baker is excited to start up Sunny Cove Services, but when she hires someone who ends up dead a brand new mystery opens up. Can she follow the crumbs to the killer?

A Spoonful of Suspicion

When hunting a new property for her bakery tumbles into a hunt for a killer, Sammy Baker is thrown once again into a culinary mystery that needs to be solved before she is framed for murder.

Sammy’s faithful Toyota breaks down and she might even need to buy a new vehicle. But when the owner of the dealership is found dead after a hit-and-run, Sammy begins to wonder if it is more than an accident.

When the residents of Sunny Cove find out that the Columbia County Cooking Competition is to be held right in their small town, Helen is convinced that Sammy will win. When her top competitor is suddenly eliminated, Sammy has to find the culprit!

Raisin to Be Thankful

Sammy has much to be thankful for, and she wants to help others. But not everyone in Sunny Cove is interested in helping the homeless, and when one of the homeless man is found bludgeoned and the local financial advisor goes missing, Sammy has to figure it all out before it’s too late.

It’s bitterly cold in Sunny Cove, but nothing could be as icy as the chill that runs down your spine when you hear that your neighbor has come to a grizzly end! Join Sammy for a new year mystery that begins with an untimely end, but promises a brand new beginning.

The mayor of Stone Springs is on his way to Sunny Cove to campaign for governor, but every step of the campaign trail is sabotaged. Sammy begins to think this is about more than just politics, and she sniffs out a mystery.

Sammy is eager to get a homeless shelter established in Sunny Cove, but everyone in town believes the house is haunted. Sammy’s got to get to the bottom of weird happenings if she’s ever going to make this shelter a reality.

A Final Slice of Crime

Sunny Cove is thrown into chaos when the clerk at the Gas ‘n’ Guzzle is found dead behind the building. Sammy has to uncover the culprit, and discovers romance on the way!

Elderly amateur sleuth and wedding planner, Molly Grey, is bored and begging for something to get her detective teeth into. When they are asked to plan the wedding of the son of wealthy scientist Mace Brick on a paradise island in the Indian ocean, it seems like a dream, but there’s a murderer on board!
Details
Author: Donna Doyle
Genre: Cozy Mystery
Tag: Mystery
Publisher: PureRead
Publication Year: 2020
ASIN: B083TG1PQB